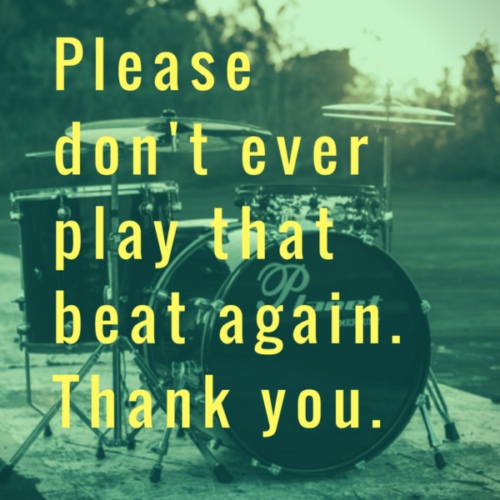 In the late 90s, if you walked into any Guitar Center or any local music store in America, you’d hear it.

That beat. That terrible terrible beat.

Standard Rock Drumbeat 1a, with varying degrees of forgettable funk thrown in.

I began to hate that beat. Favorite songs were banished from my mix CD’s if they had that beat. I needed something different. No drums. Handclaps. 16th note rimshots. Anything but that beat.

1 A new sound emerges. Like Adele a few years back. Drake. Bruno Mars 80s funk.
2 Everyone wants that sound. Producers are throwing up tracks onto Soundcloud, selling beats on Beatport, samples on Splice.com.
3 Label-funded soundalikes are everywhere. Most not great.
4 You hear soundalikes on commercials.
5 Then the next sound comes, and most of those tracks don’t have a home anymore.

Most young producers who got into music production when trap was new will have trouble shifting out of that lane. They will be out of the game. Music producers have to evolve or die.

There are pretty much 3 options if you want to find an audience as a producer:

1 Don’t give a shit and just do your own thing.

As good as this sounds, VERY few are able to get any progress with this approach. Your beloved “sound” is really just a combination of a few records you fell in love with at a certain point in your life. So really, its like the trap producer who stayed at the party too long, but in this case the party was in some random apartment in the suburbs. Same deal.

2. Become a trend spotter. This is a good option.

Notice how rock has died off. Notice the new Khalid-style understated mellow R’n’B is so good right now. Notice the shape of melodies, how beats are changing. The sounds, the mix, the mastering. More on all that in another post.

3. Be a crate digger. This is a great option.

Find those fresh sounds that nobody else has rediscovered. The Devo-esque bouncy punk like Rihanna and Pharrell did for the N.E.R.D track “Lemon.” Smooth 70s grooves like “Back Pocket” from Vulfpeck.

This is my favorite approach, because if it was popular once and is updated and done well, it will be popular again. Plus, its way less crowded than following trends. And these tracks have a longer shelf life, because of their uniqueness.

Be smart. Be intentional. Be strategic.

Scout + Adobe get the nod from WEBBY