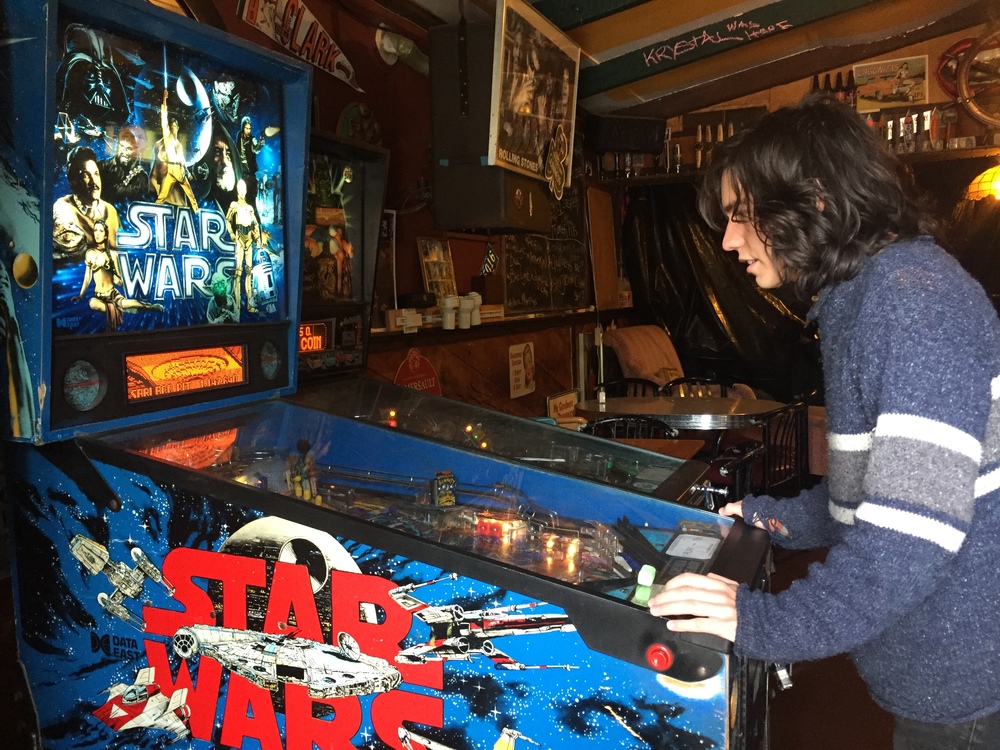 On a cool Thursday afternoon, Scout’s producer Casey met with French Cassettes’ members Scott Huerta and Mackenzie Bunch at an Outer Richmond dive bar for beers, pinball, an infamous meat cone, and a round of questions.

Upon arrival, the bar was undergoing renovations and the kitchen was closed, so there was no meat cone or ping-pong to be had, but we got a round of beers and talked about lots of random things.

To start things off, a surprisingly-appropriate question for the day (not naming names): Go-to hangover cures:

Mac: Michelada, hands down. And steak.

Scott: Just had his first day as a designated shopper for Instacart

5. Thoughts on the current state of San Francisco and how it affects the music scene?

Scott: Snapchat had taken over and it’s lame. I try to never take videos at shows.

6. If French Cassettes were a cocktail, what would be in it?

Mac: Tequila, vodka, and whiskey. And then we spit in it. Hanging with French Cassettes in a dive bar in the afternoon! (L-R Casey, Scott, Mackenzie)

*They all also make their own deodorant and swear by it. Recipe: coconut oil, baking soda, scented essential oil of your choice. Optional: cornmeal.

Mac: Two Jacks Nik’s Place on Haight. On Thursdays they do a #tbt menu and throw back to the prices on their 1977 menu. $2.45 cheeseburgers, 70 cent french fries and salads!

Scott: The Tee Off makes a mean veggie burger. The pupuseria at 16th and Valencia. And Shizen Vegan Sushi Bar & Izakaya.

*Scott: You just like Scully. Mac: Yeah she’s pretty hot. Scott: And you know what, so is Mulder. Mac: Yeah totally.

America's Record Collectors And The Power Of Music

Good Luck Getting This Jingle Out Of Your Head...