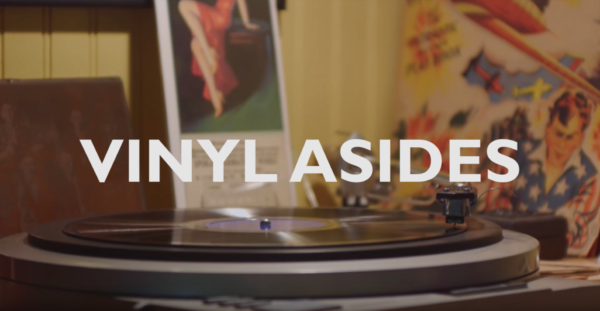 America’s Record Collectors And The Power Of Music

Cooper Kenward is a video editor at Avocados & Coconuts, and a musician with badass rock’n’roll band Nature’s Vegas, and his dreamy retro country project, Glass Mountain Rodeo. In the summer of 2014, he and his buddy Jonathan Shifflett drove from San Francisco to New York City, meeting and interviewing record collectors along the way. The result was a 10-episode series of engaging, quirky, and delightfully relatable profiles of America’s vinyl collectors and the inherent passion for music at the base of it all. This is Vinyl Asides, and it is absolutely worth your time.

Start by downloading Cooper’s vinyl playlist, Scout & About (chock-full of warm, crackly gems), or stream his more recent faves on Spotify: Scouted. Then, dig in to Casey and Cooper’s chat about connecting with music in the age of infinite choice, creative uses of music in film, and the quest for the ultimate collection.

SCOUT: Tell us a little bit about the Vinyl Asides project & road trip.

COOPER: That project was developed with my buddy Jonathan, who I’ve known forever. We were like ‘We should just do something fun!” So we took a break from working and decided to do a road trip across the U.S. with the intention of playing gigs. But it felt impossible to book gigs just the two of us, so we decided to find record collectors.

We knew the first guy from the first episode, which was Oliver Wang, from a project I did about Bay Area hip hop, and he turned me on to his blog, Soul Sides. So we interviewed him, and then we were like, what if we just found record collectors? There’s gotta be one in each town, regardless of how small. We’d get to a town, go to the local record store and ask, and then schedule an interview within those days we were there. It would always be word-of-mouth where we’d tell them the next town we were going to and they’d suggest someone else to interview.

SCOUT: Were there any particular collectors who stood out to you, or had especially crazy collections or stories?

COOPER: Yeah, I think everybody gravitates towards this guy, Chris King. He’s just sort of mythical in a way. Chris King has this crazy 78 collection in Virginia. He curates a lot of stuff for a label called Dust to Digital. He’s just such an eccentric, really smart, well-spoken individual. He’s an individual in every sense of the word.

He has this record by Geeshie Wiley, it’s a 78, and there are only 2 of them in existence. The NY Times did a really interesting piece breaking down the importance of it, because it’s this really weird, absolutely heartbreaking record called “Last Kind Words Blues”. It’s like a lament, you just have to listen to it. It’s absolutely heartbreaking.

Also the way he plays records is really interesting. His whole thing is trying to get the perfect sound out of that 78, because 78’s are usually destroyed, and they’re not very good for sound quality, or that’s what people assume. But if you listen to them in the proper room, and it’s a pretty good version, it’s like a live performance. You do hear the room tone of that person, and you really get a sense for the performance that I feel like is lost in a lot of music that’s recorded with lots of overdubs. Not to say it’s better, but it’s just one person in a room with one microphone, and when it’s played on the right system – like when you’re with Chris King and he’s putting little popsicle sticks on top of the needle to get just the right pressure – it’s very weird, it’s very hypnotic, it’s very spiritual in a sense. And it makes you listen to music in a different way.

That’s something I personally learned throughout the road trip, was just a different way of listening to music. I still do it, I put music on in the background, and it’s more to have something there mood-wise. But then there’s also times when you sit down and it’s just you and the album and you’re really listening to it. It’s really hard to do nowadays.

SCOUT: As music has become more accessible, there are more options, and it’s available anytime, anywhere. What do you think we have lost, and what have we gained?

COOPER: I think music is more in the background than ever. You don’t sit down or just dance to a song in your room with someone. I mean maybe you do, but I don’t think it happens as much. I just hope people don’t stop really listening to a song, and having an emotional connection to a song. You can do that with Spotify, or a mix tape, or something, as long as you’re connecting emotionally I don’t think that’s a problem.

COOPER: I like the tactility of vinyl, and it makes me listen to the whole record. When I’m on Spotify, and I use it a lot to find music, I get ADD really quick. When I buy a record, I make sure that I will listen to most of it, or I won’t have it. There has to be a reason to have it.

I don’t know why exactly I get really drawn toward having the original version of a certain record, but there is something nice about having an artifact that’s like ‘this was pressed from that artist’. I feel more connected to it.

SCOUT: There’s so much more to vinyl and music collection than just finding and having the records. It’s such a great starting point for sharing and proliferating lost or just amazing music.

COOPER: The reason Jonathan and I picked all the people we did for Vinyl Asides was because they all had this curator aspect to their record collection. They didn’t just have a record collection that they hoarded for themselves, they did something with it. Ira Padnos in Louisiana basically finds all the artists from his favorite records and puts on a concert – the Ponderosa Stomp. Nathan Salsburg runs the Alan Lomax collection, and saved a whole collection from the dumpster that he used for a box set on Tompkins Square. Plastic Crimewave uses his almost like a museum that you can come visit. Everybody did something with their collection, and there’s a reason behind it.

SCOUT: I think you’re touching on something that’s so true, which is that music discovery is such a big part of it. A lot of times collectors not only want to find the one rare thing, but then share it. Or DJs that use records and share music that way. As an editor, putting the right song in something that’s going to be seen and will expose people to that music is such a part of the process too, and such an important part of the music industry now – the sharing and discovering.

COOPER: It’s really tricky because people have to have that emotional connection to the song. You can play a song to someone and they might not make the connection, but they’ll find that song again a year down the road and it will mean a whole different thing to them and become their new favorite song. I’ve had that happen to me when someone’s played me music, and I wasn’t that into it, and now I’m obsessed with it.

It’s one of those things where it all depends on the moment. I think it’s a little trickier now that music is played everywhere. It’s almost overwhelming. There’s music playing here, when you walk into a store there’s music playing, it’s in your car, people have headphones in all the time. It’s so saturated. You almost need a gap of no music to come back and listen to something again because your brain just gets so tired!

SCOUT: How do you think music is misused in film/video/content these days? What are some things you don’t like about they way its being used?

COOPER: The obvious one is forcing emotion, when it’s very obviously trying to tell you how to feel. But, I think people have a really good bullshit meter when it comes to that kind of stuff. Also, there are certain songs that we love and are emotionally attached to, but putting that in there where it doesn’t really work for everybody else at all. Or, people putting in songs where the lyrics pertain to the moment. I don’t know why I have a pet peeve for that, but I feel like that can be dangerous when it’s very see-say. Everyone thinks they’re Scorsese when they curate songs. Randall Poster makes it look easy, but it really isn’t. I’m always curious about that guy, like how does he do things?

I have a lot of respect for people just messing around with music in film. In The Long Goodbye, the Robert Altman movie, you hear the same song throughout the movie, but it’s all done in different styles. So it’s like playing on the radio when they’re driving around, and it sounds like what you’d expect on a late-night radio station. Then he goes into the supermarket and it’s the same song, but in like a supermarket sort of way. And it’s very subtle and you don’t pick up on it until later. It’s just this big joke in the movie. It’s really fun. I like that kind of stuff where you’re like, oh you didn’t just throw a song in there that just emotionally “solves the problem” for the scene, you really had fun with it in the context.

SCOUT: Yeah and it becomes its own little art piece, or form of creativity within the film.

Let’s bring it back to you as an editor. Editing has so many similarities to music with pacing, tone, and rhythm, and it can be so tricky. I’m sure you know how powerful it is to find the right music for film, and how hard that can be. What’s your typical process for finding music for your cuts? What are the challenges, and rewards?

COOPER: Music is so tricky. It really is. And it’s so subjective. Because you’ll have the piece you really like for an edit, and you show it to a client and they have some personal reason why they don’t like that. And I totally get that. Or they’ll pick one that they’re in love with, and we’ll have totally different opinions on it. Occasionally there’s the perfect song that everybody agrees with, and then it’s unlicenseable. For me it just works sometimes, you just hear it and you’re like “Yep, that’s the one!” and you throw it in there, and it clicks.

There are certain things we did where we just lucked out. We did spots for It’s-It ice cream, which we’re really proud of. We licensed this weird German Texas polka music that sounds like you’re on a carousel, drunk. It’s all warped and it works really well for kids eating a bunch of ice cream and acting really cute.

There are some times when you add a music track and the video becomes greater than the sum of its parts, in a sense. That’s what you really hope for, where you find something that just enhances it more.